What’s the Difference Between Working Remotely, Telecommuting, and Working from Home?

The phrase “remote work” has a mind-numbing number of synonyms and juxtaposed terms. It’s also called telecommuting, telework, work from home, work from anywhere, mobile work, flexible workplace, virtual work, distributed work, and more. If you’re a jobseeker confused by the plethora of different terms used to describe working remotely, you’re not alone. At various times, one term can take on a slightly different connotation. Sometimes, both employers and workers use these phrases interchangeably. And sometimes they refer to specific circumstances. So to set the record straight, here’s a brief history of remote work terminology and what they all mean in the digital age.

“Telecommuting” is a term first coined in the early 1970s by Jack Nilles. Nilles was a former NASA communications system engineer and director of interdisciplinary research at the University of Southern California. Ahead of his time, he was the first to explore the possibility of using technology to work away from the main office. His research was published in his 1976 book, “The Telecommunications-Transportation Tradeoff: Options for Tomorrow.”

In this context, telecommuting was an innovative new way to reduce reliance on car travel. However, in its original usage, Nilles referred to workers reporting to satellite offices. Located closer to employee homes, these offices would reduce the need to travel long distances to the company’s main office. The impetus for this idea was the economy and other issues of the 1970s characterized by air pollution, gas shortages, and gridlock.

Since then, telecommuting has remained a dominant term, although the meaning has evolved somewhat. Now it often refers to workers who maintain a traditional office schedule and work part-time from an alternative worksite. However, it maintains a specific reference to the alternative location reducing commute time. Today, telecommuting is falling from common usage in favor of the more generally applied remote work term.

Jack Nilles also coined the term “telework.” He defined this as:

He also adds an employee-employer relationship as a key aspect of the full definition as well.

Common usage has evolved since Nilles’ comments above, with telework becoming more frequently associated with government remote work programs. This is largely the result of a landmark piece of legislation called the Telework Enhancement Act of 2010. This law required all federal executive agencies to create remote work opportunities for eligible employees.

According to the new law:

The term ‘telework’ or ‘teleworking’ refers to a work flexibility arrangement under which an employee performs the duties and responsibilities of such employee’s position, and other authorized activities, from an approved worksite other than the location from which the employee would otherwise work.

Interestingly, the new definition does not refer explicitly to the use of technology. It also does not carry an implication that a commute trip is avoided. However, it does maintain the employee-employer relationship and the idea that work is moved to the workers that Nilles advocated.

What is a Remote Job?

Although the most popular term currently, the origin of the term “remote work” isn’t as clear. Some researchers assert that it originally described workers using broadband technologies to work from anywhere—the implication being that the worker was located too far away to commute under most circumstances. As opposed to telework, the employer-employee relationship has no particular emphasis. Also, freelance and independent contractors fall into the category of remote workers.

Today, the term ubiquitously refers to all kinds of flexible, telework, and telecommute arrangements. It implies that technology facilitates the work completed but with no requirement as to where. Possible locations include the home, coffee shops, coworking spaces, beaches, and anywhere else that can receive an Internet signal.

What Is a Work from Home Job?

The term carries an understanding that if you chose, you could work in the office. It can also indicate a part-time or casual arrangement. For example, an employee works from home when they don’t have any meetings scheduled that day. However, the phrase work at home is also an often-used synonym.

Work at home jobs gained an unsavory reputation because of their association with online job scams. These scams even have a dedicated section on the Federal Trade Commission (FTC) Consumer Information website to warn the public. Jobs advertised are usually some form of get-rich-quick scheme. And sometimes they promise good pay for menial tasks such as stuffing envelopes or mystery shopping.

A variety of other phrases and words describe remote work in addition to the most often heard terms discussed above. Some of these were introduced decades ago and some are just now coming into use. Below are a few of these terms and their definitions.

“Flexiplace” is a phrase created during a successful pilot program by the federal government and the National Telecommute Initiative. A portmanteau of “flexible workplace,” the program began in 1990 and tested working at remote locations other than traditional government offices. The report, which focused on working at home, concluded that flexiplaces provided significant benefits to both employees and government agencies.

After completing the pilot, the Office of Personnel Management (OPM) adopted the term “telecommuting” to describe remote work. While fleixplace focused on work from home, telecommuting covered employees working from home or at another approved alternative location.

Initial terms describing remote work focused on using technology to work at a distance (‘”tele” in Greek) from the office. Today, terms express how technology can bring workers together. According to Oxford Languages, in computing, the word “virtual” is an adjective with a couple of relevant meanings. It can mean “not physically existing as such but made by software to appear to do so.” Related to that is the meaning “carried out, accessed, or stored by means of a computer, especially over a network.”

With the arrival of cloud computing and other technological advances, employees can now take their computers anywhere without peripheral hardware. Whether they are working at home, on safari, or at a hot desk in a coworking space, virtual workers can access everything they need for work. Using this technology, fully remote business models are more achievable than ever, even with no traditional office space at all.

The term virtual employee or virtual worker may describe a type of freelance employee or outsourced worker. In this context, “virtual” refers to positions in an organization that employers routinely outsource, such as virtual assistants or bookkeepers.

Another emerging term with a technological origin is using “distributed” to refer to teams and workplaces. Mirriam-Webster defines distributed in a computing context as:

Having at least some of the processing done by the individual workstations and having information shared by and often stored at the workstations.

When used in a human resources context, it refers to the geographic separation of a team or workplace; team members or offices spread out at different locations. Working locations can vary, but oftentimes these teams and companies cross borders, continents, and time zones. In addition, distributed members can conduct work at home, in the corporate HQ, or in branch or country offices.

What Do These Terms Means for Your Job Search?

The various terms for remote employment can have slightly different meanings depending on the context. As one term enjoys popularity and applies to the current environment, another will rise to take its place. Examples of this include “telecommuting” being replaced by “virtual worker.” Some terms such as “telework” are increasingly specific to the federal government. And others, such as “remote work,” are becoming a general way to refer to all possible work arrangements outside of the traditional company office. But in many instances, all of these terms are seen as synonyms.

For a remote jobseeker the multiple, overlapping terms can be confusing. Cut through the clutter—don’t assume that you know what a company means when it uses a remote work term. Reread the job ad, research thoroughly, and ask hard questions in the interview. This approach will ensure that you understand the company’s job expectations for remote work positions in a dynamic business environment.

13 Tips For Making The Best Impression On Potential New Hires 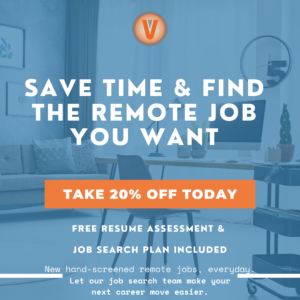 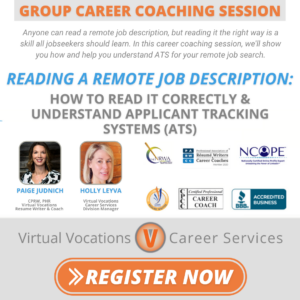 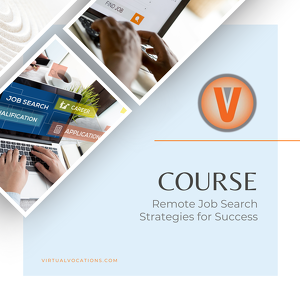